“Star Ocean: Anamnesis” is the first smartphone title in the “Star Ocean” series. With the same world view as the previous series, you can enjoy the exhilarating action battle that is the feature of the series. You can also freely combine characters from past series as party members.

Episode3 "Star Ocean: Anamunesis -The Leash Code-" will be released "Episode3 CHAPTER: 01" after maintenance on Thursday, April 30. See below for stories and new characters.

■ Story A
young man running in the battle of the sea of ​​stars had "Earthlings".
The captains have unraveled the mystery of the Daft system and gained many friends, but their promise to return the future girl Tika to the future has not been fulfilled. The captains are aiming for an Azrite system with the Stardust Bazaar, an autonomous asteroid belt where many people and information gather. In the Azurite system, however, an interstellar war broke out between the human-controlled planet Raza and the sub-human-controlled planet Ober.
Captains who sought to avoid the fire meet Heath Bureau, a lifeguard on the lifeboat Raza, to send the war refugees on the planet Ober to the neutralized Stardust Bazaar. Captains commissioned to protect the war refugees and escort them to a neutral location allow Heath to board a temporary voyage, but a surprising report comes from Valka S90, who was inspected.
"Mista Heath is an Earthling ..."
An unlikely "Earthling's Gene" guides Captains to a new mystery in the universe. 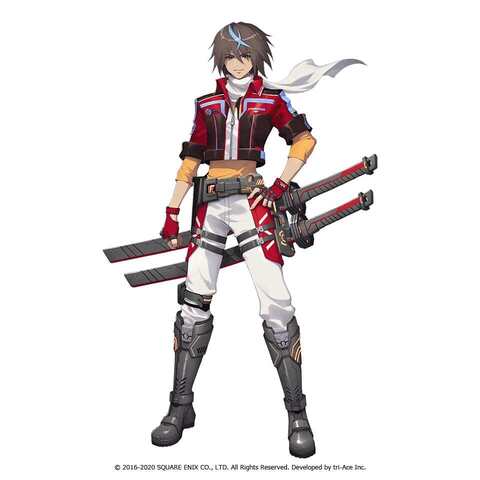 Heath Bureau CV: Ryota Osaka
CHARACTER DESIGN: Akiman
ILLUSTRATOR: mot
Weapon: Twin Swords
Profile:
A man I met in the Azlight system that I visited to find ways to bring Tika back to the future. While they were fleeing with the refugees, the party rescued ... or rather, a person who was almost unilaterally entrusted to his boss with a lifeboat. According to Varka and Koro, his appearance, the language he speaks, and his genetic information seem to have important secrets. 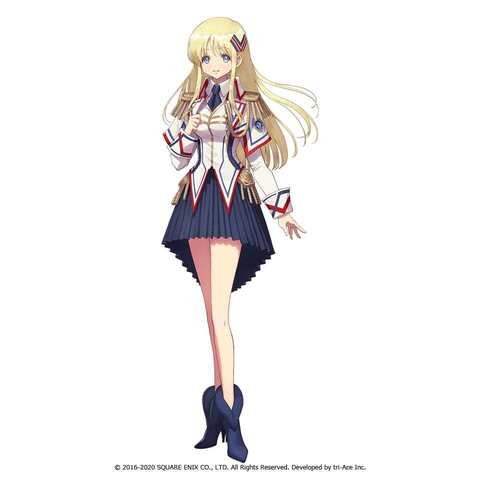 Jeanne Mars West CV: Saori Onishi
CHARACTER DESIGN: Akiman
ILLUSTRATOR: mot
Weapon: Sword sheath
Profile:
Heath's boss. Even in the event of an emergency, the tone of whether or not you have delivered a lifeboat along with Heath indicates that you are a tough person. 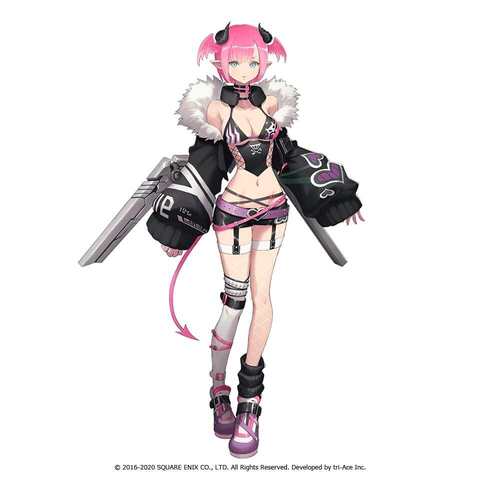 Lavania Rose CV: Azumi Waki
CHARACTER DESIGN: Akiman
ILLUSTRATOR: mot
Weapon: Whip
Profile:
A woman I met in the Azrite system that I visited to find ways to bring Tika back to the future. Pirate of the Stardust Bazaar, the only daughter of Gartoga Rose, the head of the Rose family. The succubus is a demonic and has half-characteristic mechanical wings of human species. Apparently, he has a shallow relationship with Heath.

Also, the opening movie of Episode3 has been released. The opening theme song "Vanishment" will be in charge of "SHADOW OF LAFFANDOR", who worked on the episode 3 trailer theme song "Light Dance Place".

"SHADOW OF LAFFANDOR" is a music unit composed of Keiko Yanai (lyricist / composition / song) and Naoyuki Chitani (sound produce). Debuted in 2017 with the title "Shadow of LAFFANDOR-The Story of the Lafandador-A Recollection of the Light and Shadow of a Girl". He has a reputation for expressing stories and worldviews in music, and is in charge of music production and arrangement of various large game titles.

In addition, the 2020 roadmap of this work and the characters participating in the new war have been released. 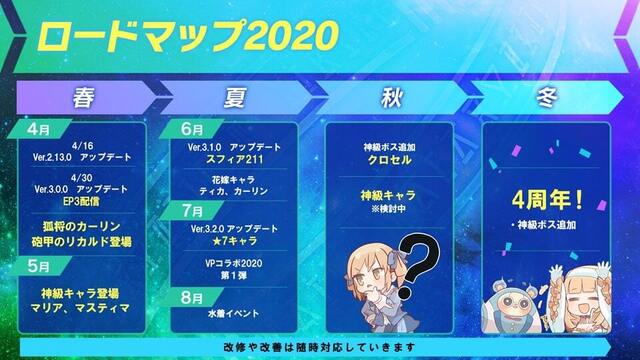 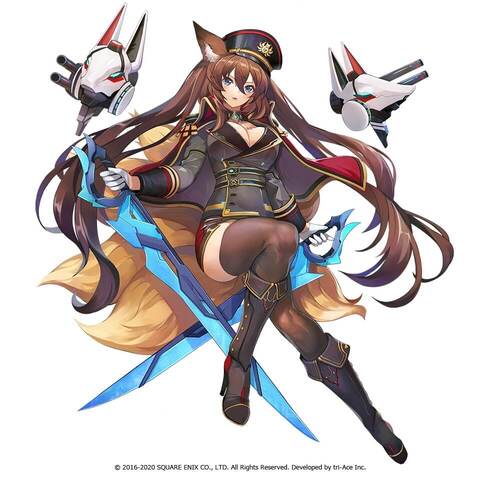 Fox Carlin CV: Chinatsu
Akazaki ILUSTRATOR: pupps
Profile:
A woman she met on Daphtine, a planet that descended to find Tika's parents. I decided to wear a uniform as a crew member of the official Galactic Federation ship, but she couldn't find anything in her stock that would fit her body size, so she seemed to find her first. In fact, it is a female captain's uniform, but given the difficulties of her search, friends are wondering if she could point out. 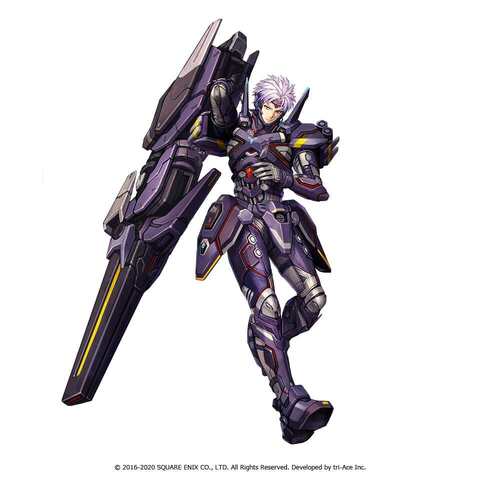 Ricardo of the Gun CV: Tomokazu Sugita
ILLUSTRATOR: Yuhi Kagimoto
Profile:
A man I met on Daphtine, a planet that descended to find Tika's parents. Asking Mastima to repair the damaged armor in the battle at Daphtine, Kolo and Verda were interested in the repair, and when they realized, the strongest full armor combining the best of the sciences of Ex-Ziva, Galactic Federation and Rambulans. Had been created. Ricardo complains about the completion of a completely different armor, but he really likes it. 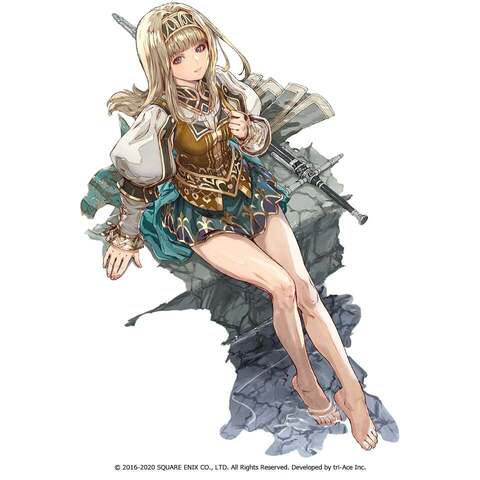 Alisha CV: Akiko Yajima
ILLUSTRATOR: Akiman
Profile:
The first princess of the Principality of Dipan, located in a different space and space, including Midgard where humans live and Asgard where the gods live. He lived as imprisoned, separated from the country, because of the soul of one of Valkyrie's Sir Melia. He was a recoil who acted together with Sirmeria in his early days, relying on Sirmelia for everything and has a weak and confident personality. 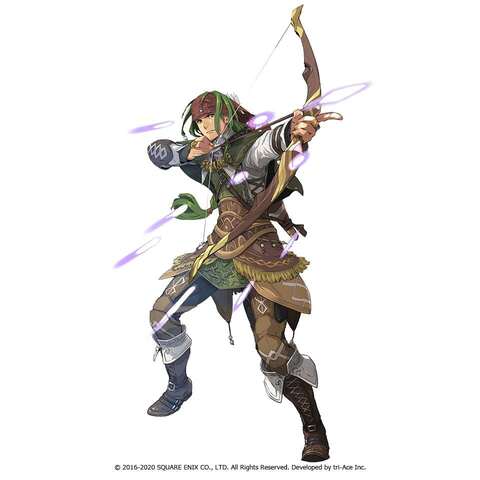 Rufus CV: Yuichi Nakamura
ILLUSTRATOR: Katsumi Enami
Profile:
A young man with a bow who lived in a different world, such as a different space-time, midgard where humans live, and Asgard where gods live. While wandering around the world, she was accompanied by her invitation to Alicesha, who was directed by Sirmelia, in the port city of Zolde.

The machine "Mach Patrol" that appeared in the previous year's anime "Invincible Steelman Daiturn 3" is a heavy and heavy diecast figure! On February 15, 2020, it was decided to be released by Zoubou ...

"Rilakkuma" Loppi limited goods appear one after another!

Loppi and Loppi recommended limited goods are now being accepted for Lawson Spring Rilakkuma Fair! There are plenty of original goods available only here! This time, we will introduce products that co ...

My illustration of my youth romantic comedy is wrong."

It has been decided that illustrator "Pankan 8." 'S "Young romantic comedy is wrong" illustration exhibition will be held at Toranoana stores in Osaka, Nagoya and Fukuoka after April 2020. Published b ...

A watch commemorating the 10th anniversary appears from "Ultraman Zero"

App special price sale such as “Fate”, “Stage”, “Danmachi” is now on sale!

Chara clock, a brand that combines wake-up apps with characters such as "Fate" and "Dungeon dating" or "STEINS; GATE", is holding a New Year's holiday app special price sale . "Chara clock" is a multi ...