"Re: Life in a different world starting from zero Lost in Memories"!

The player becomes the main character "Subaru" and proceeds the game by relive the story of the anime. You can experience the "IF story" branch, "If you made another choice at that time ...".

Also, a new game original story will be produced under the full supervision of the original author, Tatsuhei Nagatsuki. It is also possible to organize your favorite characters that appear in this work, challenge battles, and train them. 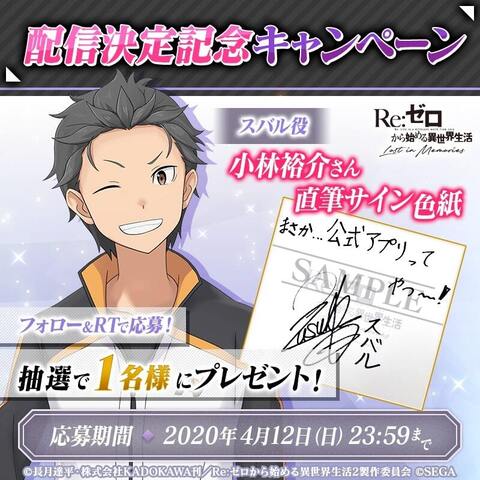 In addition, a Twitter campaign to commemorate the decision to distribute “Re: Life in a Different World from Zero, Lost in Memories” has started today from April 6, 2020.

[Game Overview]
■ Re: Life in a Different World from Zero Lost in Memories

Details of "30th HEADGEAR EXHIBITION featuring EARLY DAYS @ PATLABOR THE MOVIE in Tokyo ACT.2" to be held on January 18-February 2 in Ikebukuro Marui, Tokyo, will be revealed. became. In the same exhi ...

PS4 & PC software " Sangokushi 14 " will be released on January 16th. The OP movie has been released. This is the latest game of Koei Tecmo's popular simulation game, featuring more than 1,000 Bri ...

Comic Market 97, the largest doujinshi sale event in Japan currently being held at Tokyo Big Sight. In recent years, it has attracted attention as a cosplay event, and a number of layers and galleries ...