Survival horror "Resident Evil RE: 3" for PS4 / Xbox One / Steam scheduled to be released on Friday, April 3, 2020 (hereinafter referred to as "Bio RE: 3"). Based on "Resident Evil 3" released in 1998, this is a full remake version revived for the current model. Currently, trial versions are being distributed, including the "Resident Evil Resistance" included in this work (Open beta test of "Resident Evil Resistance" is limited to 23:59 on Thursday, April 2 until 23:59) . In this article, we provide play reviews of both titles! Please check out the product version information just before the release date. A review article of the product version of this work will be released soon.

Battle with pursuers, steps, emergency avoidance ... Experience the core of "Resident Evil RE: 3" 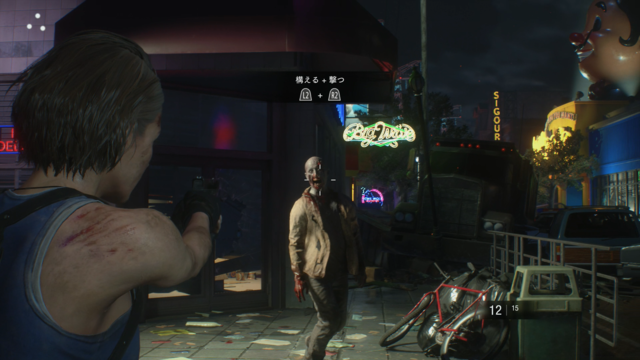 The trial version of this volume is modest. The clear time when I played was around 30 minutes. However, the core elements of "Bio RE: 3" can be fully enjoyed. First of all, Nemesis. Originally called a "tracker", this biological weapon was a prototype developed by the giant pharmaceutical company Umbrella, which was launched in Raccoon City after a major disaster. He will relentlessly chase Jill, a member of the city's special unit STARS. The giant body and black coat are reminiscent of Tyrant, which appeared in "Resident Evil RE: 2", but are different. 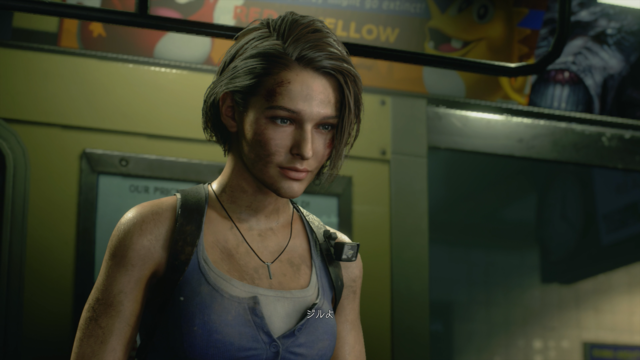 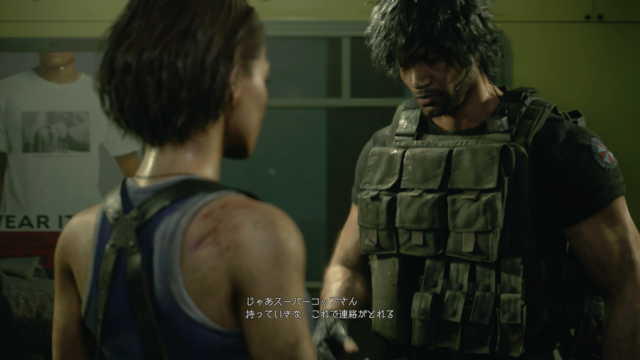 Nemesis has a figure almost twice that of Jill, but it closes up at a frightening speed. He has high intelligence and has many variations in behavior, such as going ahead of his way here or reaching out for Jill by extending his tentacles. As he escapes, Nemesis opens the door or destroys the wall, chasing Jill endlessly. It also has extraordinary regenerative power, and even if you do great damage and hold your knees, it can only be temporary, and in a little while it will be fully recovered. If you meet Nemesis, you should flee first, not a decent opponent. In the trial version, it was possible to neutralize the nemesis with one grenade, but compared to the previous work Tyrant, it is not too much, and it may be set slightly weaker as the trial version specification. In addition, although the places where they can move this time were quite limited, it seems that their narrowness was exacerbating the fear of being chased. 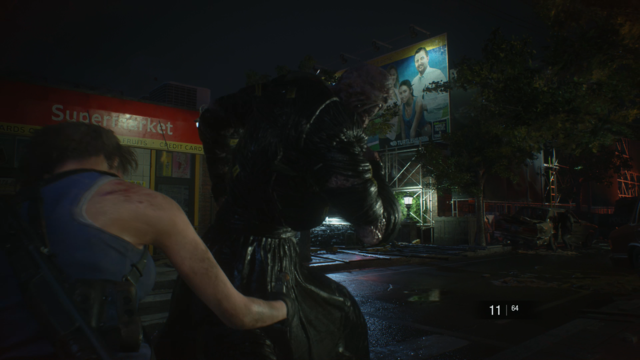 "Step" and "Emergency avoidance" are also new elements of "Bio RE: 3". The step is activated when you depress the R1 + left stick, and can move quickly in any direction. Like "Resident Evil RE: 2", the zombies in this game have a lot of stamina (about 4-5 headshots with a handgun), so you may want to avoid fighting to save ammo. However, it is convenient as an evasion technique, but the movement distance is short. I felt that it was better to use a step as a way to cope with an unexpected attack, rather than creating a situation that uses steps. 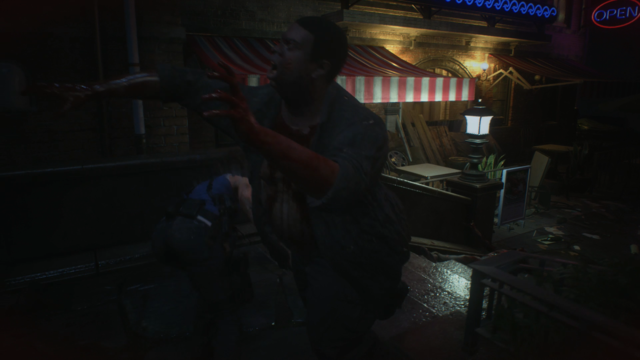 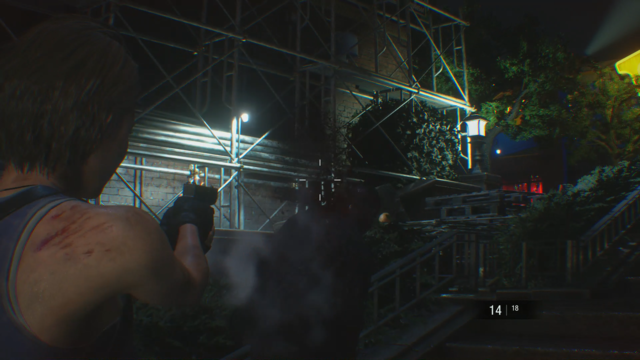 "Emergency avoidance" is activated by performing steps immediately before receiving an attack from the enemy. After moving in any direction and holding the gun, the others become slow motion and can attack the attacking opponent unilaterally. In short, if you decide on emergency avoidance, you can easily defeat the enemy, but the timing of successful emergency avoidance is very severe. If you fail, you will take damage, so it is a high risk high return. However, Nemesis attacks can also be dealt with with emergency evasion, which will help resuscitation when hunted down. 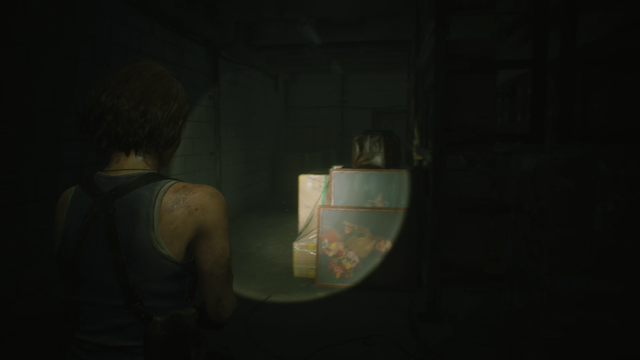 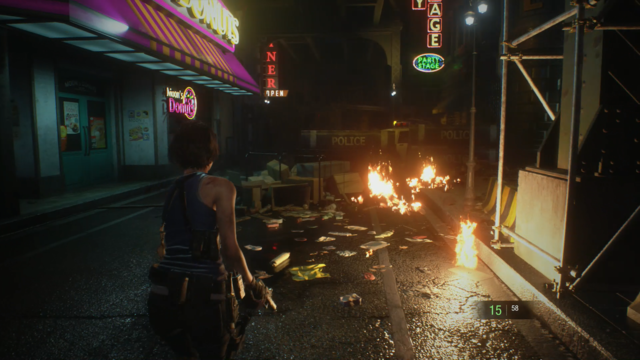 "Resident Evil Resistance" where you can enjoy asymmetric matches 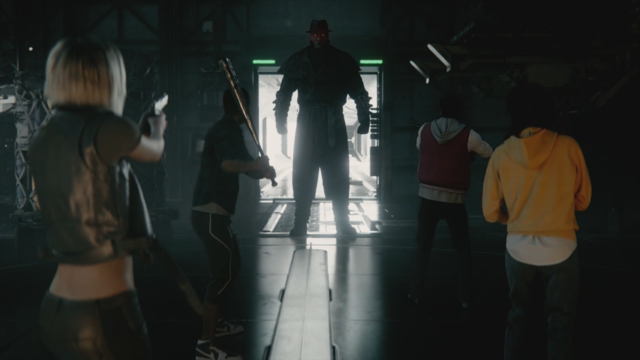 The title is different from the main one, and this is a multiplayer title. At the umbrella test facility, players fight with a survivor (4 players) trying to escape and a “master mind” (1 person) blocking the escape. 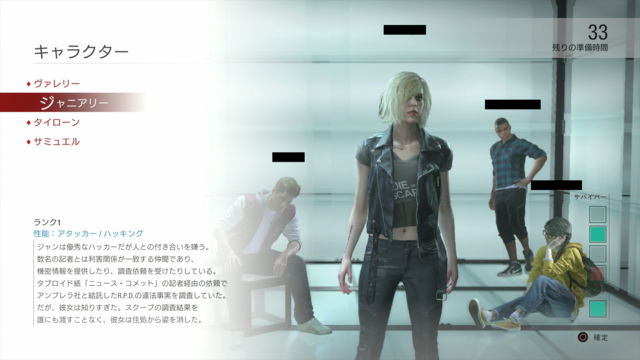 The facility is divided into three sections, and the goal of the survivor is to aim for the innermost exit within the time limit while searching for key items necessary to open each door. Each of the four survivors has a variety of skills, including healing abilities and disrupting the master mind. Because the master mind has no idea what enemy is located where, it is often not possible to play alone and be defeated because it cannot be active. If you can't fight, you can be revived by your ally within a certain amount of time, but during that time the strength of the survivor will be halved. Players who have not been revived can be revived at the entrance to the nearest parcel, but at the cost of a greatly reduced time limit. Teamwork using unique skills is the key to capture as much as possible when four people work together. 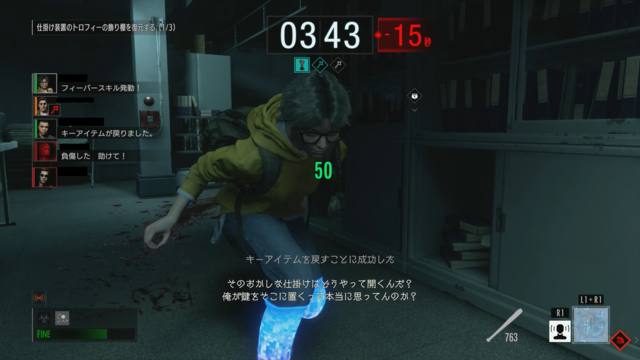 A shop is set up at the entrance of each section, where you can exchange weapons, bullets, green herbs (recovery items) and so on. The money needed to exchange can be defeated by enemies or picked up at some of the facilities. Melee weapons are especially useful in combat. It is dangerous to challenge a zombie in close combat, but in this work, one shot with a bat or hammer is more powerful than one shot with a handgun. You can quickly kill zombies and zombie dogs just by swinging nearby. However, melee weapons are durable and decrease with each hit to the enemy. Eventually it will break. Durability can be recovered with a "repair kit", so if you use melee weapons, you want to keep one. There are powerful guns in the shop, such as shotguns and magnums, but you can't buy ammunition, only the one loaded at the time of purchase (handgun ammunition can be purchased). Perhaps it's a trump card that you only use against tricky enemies like lickers. 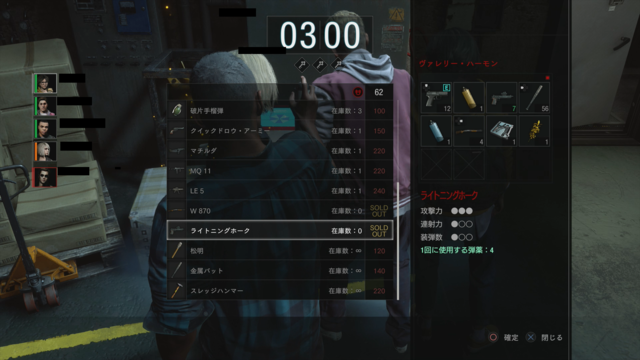 In the open beta test, the survivor tried several times but lost all. I was hurt because I wasn't able to communicate well with my colleagues, probably because I was working with randomly selected players in a quick match. I couldn't master it, but I can exchange it with fixed phrases such as "this way" and "OK", so if you are going to play beta tests or the product version, I hope you will use it. 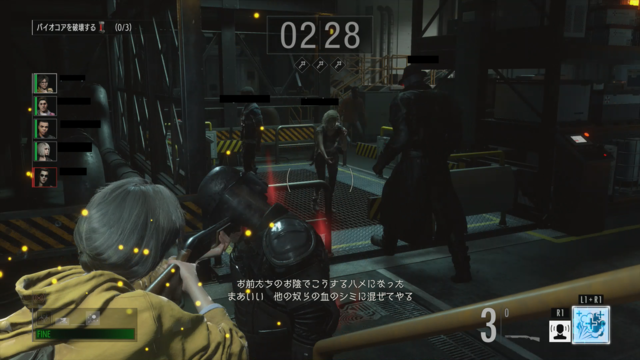 Mastermind, the administrator of the experimental facility, thoroughly blocks the escape of the survivor and aims for time out. Through multiple cameras installed at the facility, the Mastermind monitors survivors and places zombies and traps. There are costs for what can be installed. As costs increase over time, it's up to the player's tactics to plenty of low-cost traps or to accumulate costs and recall more powerful ones. When the running survivor gets caught in "Trabsami" and releases it, when you see the moment when it is attacked by a zombie from behind, it turns into a face. 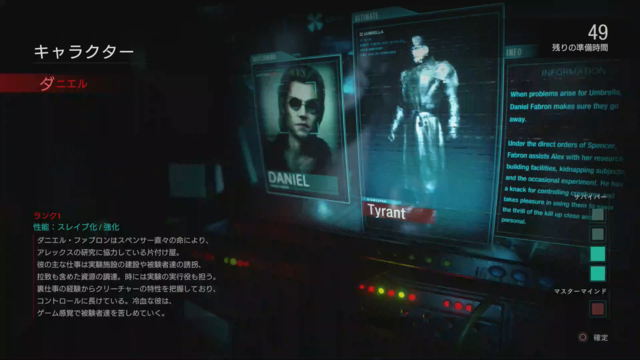 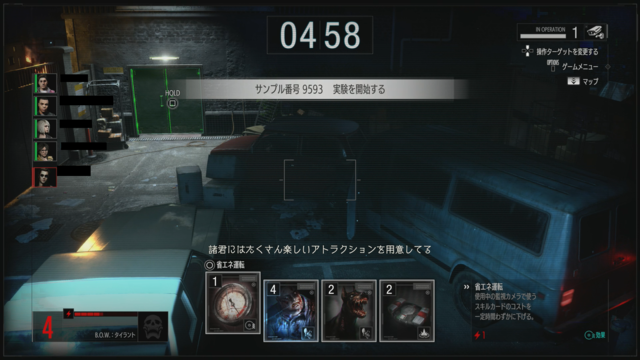 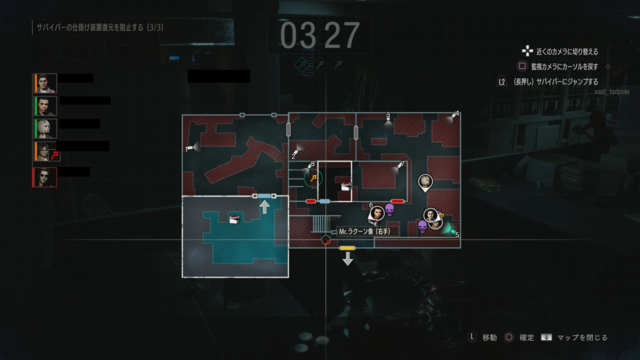 The key to winning is "how to wait for the survivor." There is no point in placing one or two enemies on the spot when one of the items for the next block is about to be robbed. it's too late. Once you step back, look into the room they use to return, the room with the second item. Always look ahead. Just thinking about this, I think that you can play quite calmly. Although not appearing in the beta test, new masterminds such as "Alex Wesker" and "Oswell E. Spencer" have been identified. 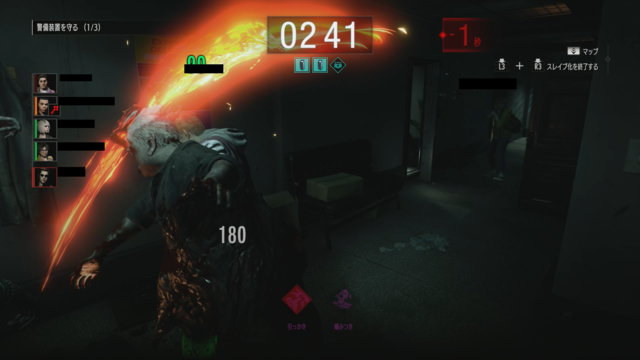 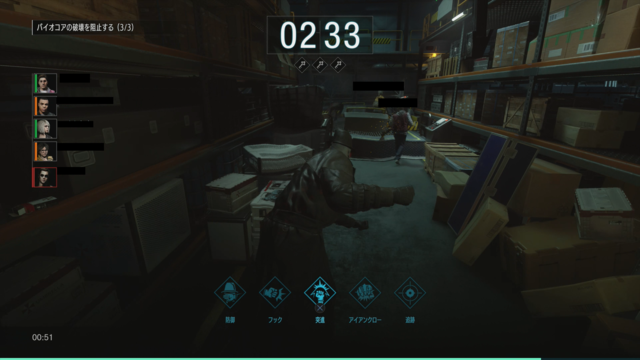 There is a trump card on the master mind side. Called "ultimate skills", you can call powerful creatures and manipulate them for a certain period of time. Daniel is a tyrant and features martial arts such as strong hooks and lunges. At the moment the Tyrant comes out, the survivors escape as indicated, so it is refreshing to hunt down and blow them away. However, the Tyrant was slow to move and attack, so survivors in large areas were often missed. It is the role of the master mind to understand the creature's ability that emerges with Ultimate Skill and consider it so that it can be fully utilized. Respawning your opponent can greatly reduce the time limit, so the timing of using Ultimate Skills will be directly linked to victory. 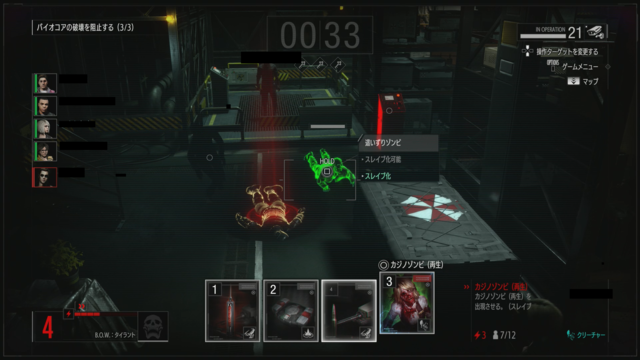 Resident Evil 2's remake title, Resident Evil RE: 2, was nominated for the Game of The Year in 2019 and was an unmistakable masterpiece not only globally, but also in my subjectivity. This is only a part of the product version, but the quality of the product is high enough to meet the high expectations that would be expected from all over the world in view of the completeness of the previous work.

Three new models of the popular interior product `` Perpetual Calendar '' at `` Donguri Republic '' which sells character goods of Studio Ghibli works will be released at the Acorn Republic nationwide ...

"Candy Online Shop" has started accepting reservations for " Devil Blade Wafers 2 (20 pieces) " (2,640 yen including tax / postage and handling extra). The 2nd wafer with a card from the popular anime ...

In commemoration of the release of `` Mobile Suit Gundam Flash Hathaway '' on July 23, 2020 (Thursday / holiday), for a limited time of two weeks from January 27 (Monday), Shinjuku Station NewDays 2 S ...