The final chapter of the theatrical trilogy, "Theatrical Version Fate / stay night [Heaven's Feel] @ .spring song" (released on March 28) The second relay interview is Joji Nakata, the role of Kirei Kotomine. As a director of the "Holy Grail War," Kirei, who overlooks the entire scene, shows a different face in this work. We talked to Nakata who participated in the final chapter with a special thought. (Interview and composition: Kotaro Gosho / Animation Hack Editor)

――After watching the completed video in Chapter 2, how was it?

Nakata: The impact of seeing Chapter 1 was so intense that I thought it would be hard to overcome it in Chapter 2 before seeing it. Also, Chapter 1 was the part of the "Ki" of the ceremony that conveys the life of Shiro and Sakura to everyone. I was expecting it to be.
Actually, when I saw the change in the relationship between Shiro and Sakura on the vertical axis, a hot drama that filled with blood was developed, and I had the impression that it was a wonderful Chapter 2 heading to the final “Yui”. The heavy battle was drawn on a tremendous scale, and I thought that this was a difficult task to clean up.

――I was not conscious at first glance, but when I looked back again, Chapter 2 was less impressive.

Nakata: In Chapter 1, there was a scene where he interacted with Shiro in Taizan (* Kensu Bansai Saikan, Taizan). had. The cleanliness in Chapter 2 is such a role that I feel that I continue to be a supervisor, and I feel that it works for Chapter 3.

――In Chapter 3, the position of beauty is different from before. Please tell us what you felt after reading the script.

Nakata: I felt a sense of responsibility that it would be the most important work in performing a person called Kirei Kinmine. If you haven't watched "Fate / Zero", I think you've always been the director of the "Holy Grail War". You should be able to feel the path of thorns that have lived. In addition, he has been a step back in the past, but he also turns himself into a story gear as one of the characters. Before the recording, there was a strong desire to work harder than usual, so that you could feel the discovery and surprise that "Oh, this is what I like." 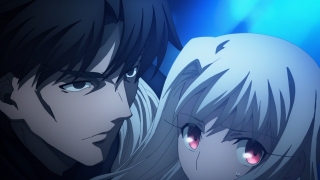 ――I heard that the dubbing in Chapter 2 was divided into two sessions. Did the same happen in Chapter 3?

Nakata: Yes. In the first half of the recording, there were a lot of choices and a long length of recording, and then the staff went through trial and error to cut it down, and in the second half there were scenes where new recordings were made from there. Director Sudo (Yotoku) was seriously facing "Fate / stay night", and when we asked him about his performance, he gave us instructions in short and precise words. This time, after the recording of the first half myself, there was a point that I personally wanted to do in this way personally, and there were places where I asked for overdoing and re-recorded.

――With this work, the theater trilogy is completed, and all three routes will be visualized in the story of “Fate / stay night”. Please tell us your feelings when you have been performing Kihonmine Kirei for many years.

Nakata: Frankly, I have the feeling that there may not be a chance to play Kirei Kamine of "Fate / stay night" at the end of this movie. I was relieved to say, "I'm gonna do it," but I was a little lonely, so I wanted to make sure I didn't regret it.
This year, we went to the TYPE-MOON exhibition for the 15th anniversary of `` Fate / stay night '', but we reaffirmed the greatness of the charm of `` Fate '', which everyone has been supporting with a variety of developments for a long time Did. Thanks for being able to continue playing Kiyomine, so I have a feeling of responsibility that I can't do anything bad ...
I felt the weight of the 15 years and the end point of the three years of the theater trilogy with the support of everyone. There are many elements that are worthy of the final chapter, and if you don't see this, "Fate / stay night" won't end, so I want you to check it out.

Anime Hack Official Twitter, Follow & RT Gift Campaign
<Prizes>
Joji Nakata's autographed colored paper, 1 person
* Resale and transfer of prizes or rights won for prizes are prohibited
<Application period>
March 23-April 26 23:59
<How to apply>
1. Follow the official Twitter Anime Hack.
2. RT (retweet) of the present announcement tweet tweeted by the official Twitter. Please be careful not to unfollow until the end of the campaign.
3. Winners will receive a DM (Direct Message) from the official twitter account after the campaign ends.