"Monster Girl's Doctor" is a popular light novel by Yoshino Origuchi and Illustration Z Ton. In a world where humans and demons coexist, a new physician, Dr. Glenn, and a Lamia assistant, Surfe, examine the mermaid gills, fresh golem thighs, and dragon scales, but for some reason they always have an abnai atmosphere ... It is a medical fantasy work. 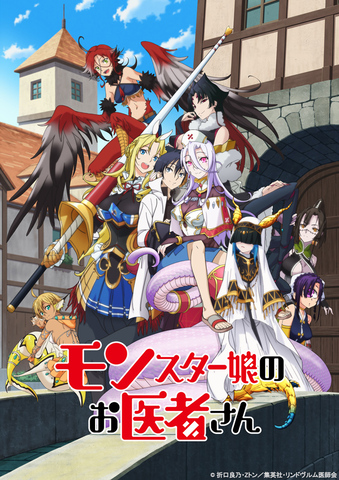 The director is Yoshiaki Iwasaki of "Love Hina" and "The Familiar of Zero", and the series composition is "Is it wrong to ask for a dungeon encounter?" "Tenchi Muyo! Mr. Hiromi Kato of "Guilty Crown" and "ID-0" will be responsible for character design, and Arbo Animation will be in charge of animation production, "We can not study."

In the released PV this time, the main character, assistants, and major monster girls will appear! You can get a glimpse of everyday life in the clinic. 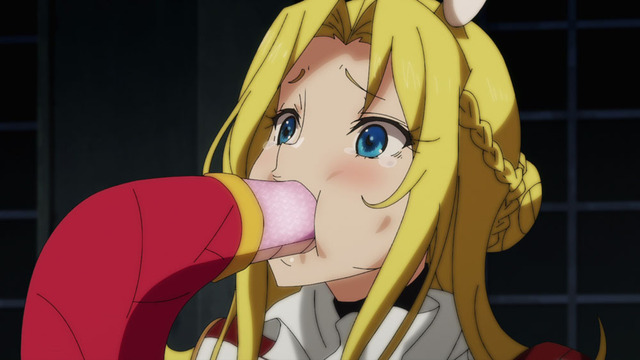 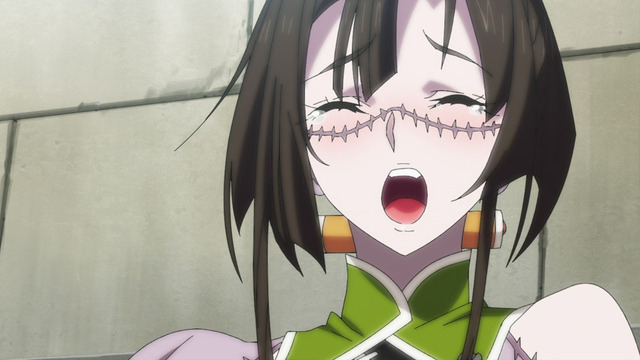 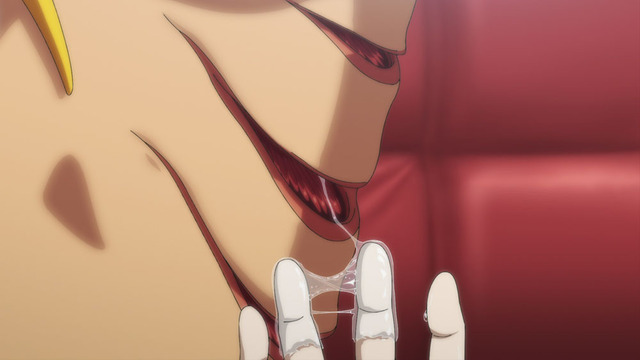 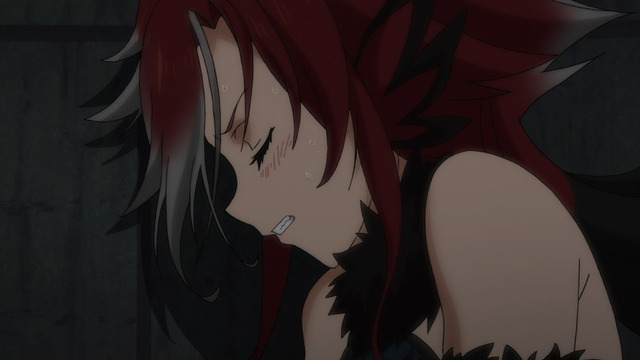 In addition, the character information of this work was also released. 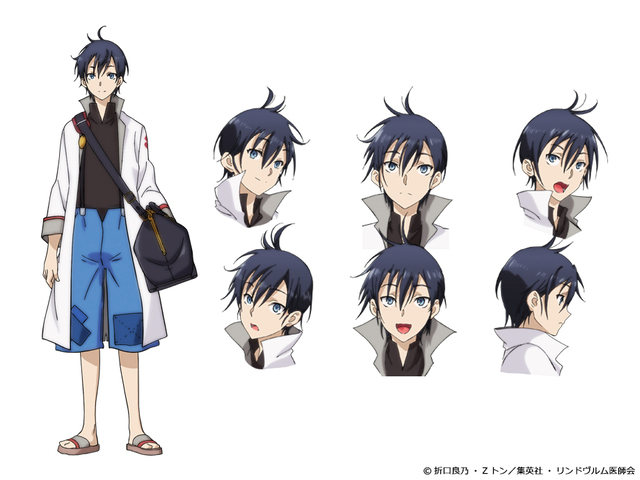 A doctor specializing in demons. Born in the human territory of the east, he met Lamia surfers at an early age and became interested in demons and medical care. There is a little unreliable, but gentle and gentle personality. He was recognized by his teacher Kthrif at a young age and was so good that he was appointed a clinic. He is quite a work person and often goes beyond his limits to concentrate on treating patients, acting unreasonably, and often used to surfing. 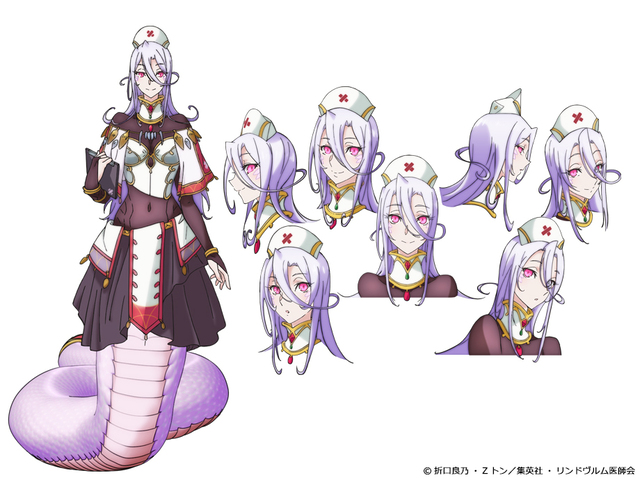 A sister and disciple who studied under Cthrif like Glenn. He is well versed in pharmacy and supports Glenn as an assistant. She is a strong and intelligent woman, but because of her jealous race, she accumulates stress as more and more rivals approach Glen. It often explodes without being honest. Use the tail dexterously like a third hand. Also, surfers usually wear special innerwear to block out sunlight because of albino. 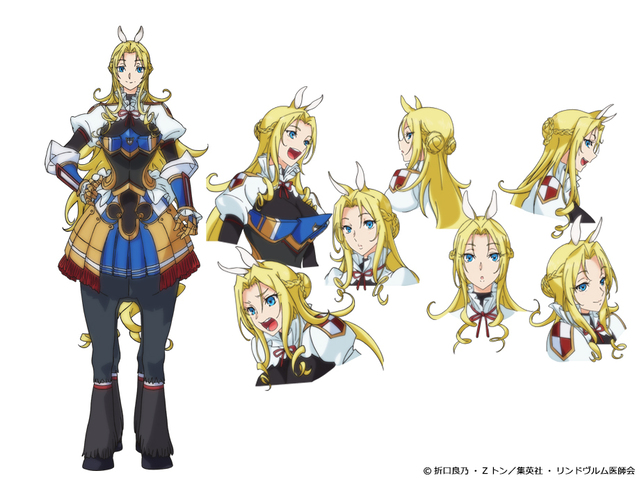 Centaur wants to make Glen the future husband. She is the daughter of Scutia Shokai, who handles the logistics of Lind Vlum, and is called "Princess" by the same race. He is in the third rank in the arena and bravely spears in duels, but is surprisingly timid. Elegant, hated to bend, honest and simple personality but kind. Since herbivore is a tribe, she usually eats only vegetables and fruits, but she eats a lot due to her large body. 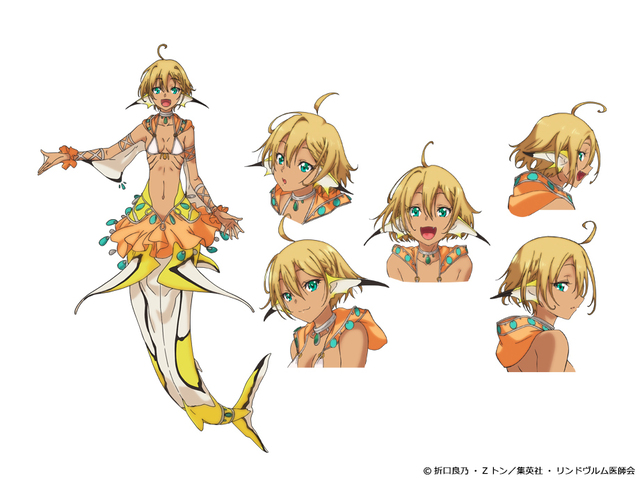 Mermaid novice diva. She is singing at "Mellou Water Street". An adolescent girl who is cheerful, cheerful and innocent. There is a side to thinking that money is severe and realistic thinking because a father disappears and has to feed a mother and young siblings. My favorite food is shrimp shell sausage, and I like to eat the whole shell. A race with a low body temperature that can cause burns when touched by humans. In the water, you can swim while protecting your eyes by closing the translucent flash membrane. 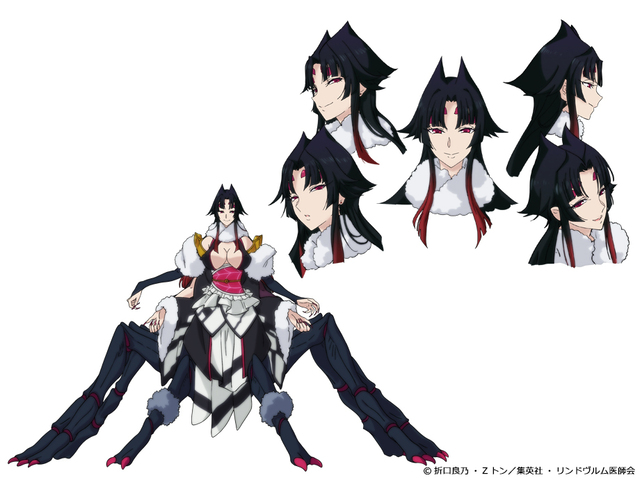 A clothing designer for the large trading company "Arashinu Hosei", which manufactures and sells demonic clothing. A race called Arachne with spider characteristics. At first glance, she is a friendly woman who has a casual atmosphere of using strange dialects of the eastern country, but has a certain “tough habit”. I'm a longtime friend of Surfes and I enjoy drinking my favorite sake together. Arachne is a race where only girls are born, so men of other races are always companions. Sometimes a trap is set up to force a favorite man into something. 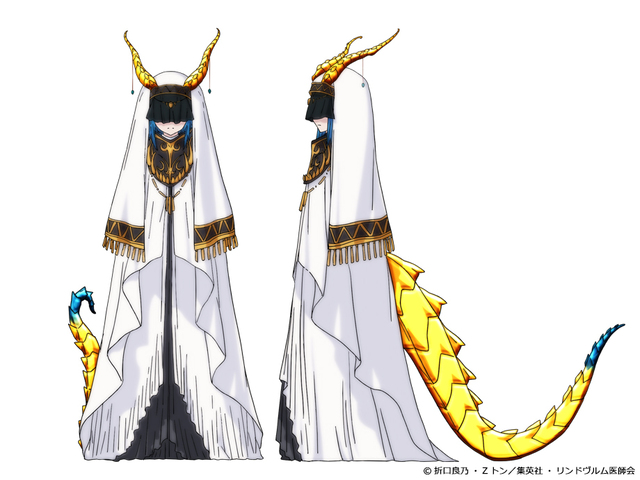 A dragon in the shape of a little girl. After the war between the demons and people, Lind Wurm was the first to develop Lindum Worm into a city of coexistence. He is still the representative of Congress and has strong power. The voice is extremely low, and sometimes the imperfections of the aides must speak for them. A pacifist who loves humans while being the strongest race in the demons. However, some people prefer watching the arena, and have the nickname "Ryutojo". 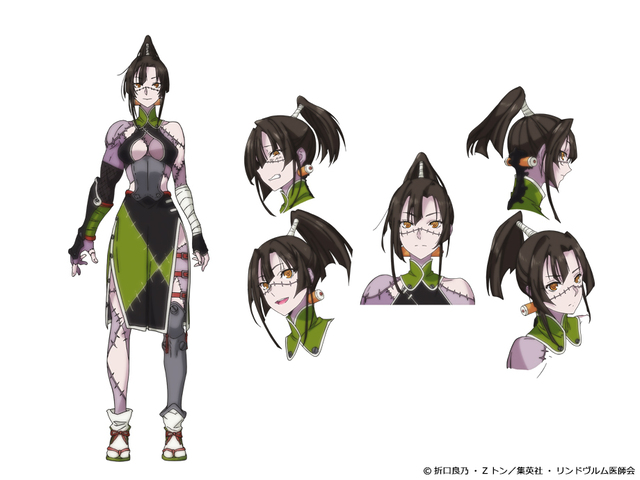 A fresh golem guarding Skady. Originally a combat golem made in the Far East, it is now free-living and alive as a close-knit escort to Scavendy. The body is fragile because it is a spliced ​​corpse and needs to be replaced regularly, but I hate doctors. Although there is no pain of loss for herself, it is a hobby of the creator who created her, and it is specified that only the sensitivity of the thigh is very good. Golems are manufactured for a variety of purposes, depending on the caster's speculation, but in hardships to create immortal soldiers. 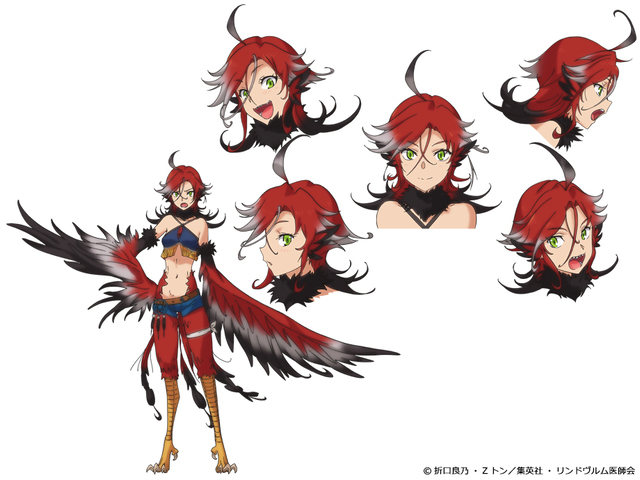 Harpy girl. She is rescued by Glens when she is trapped in a slave trader. He had no parents and grew up in the slums as an orphan. A bright and innocent young girl who loves fighting and has some unbridled, but really loves flying. It has sharp claws and can be grasped firmly even in unstable places such as cliffs and trees. What grows from the top of the head is not a hair but a feather unique to Harpy called a crown. Feathers are developed, cold resistant race. 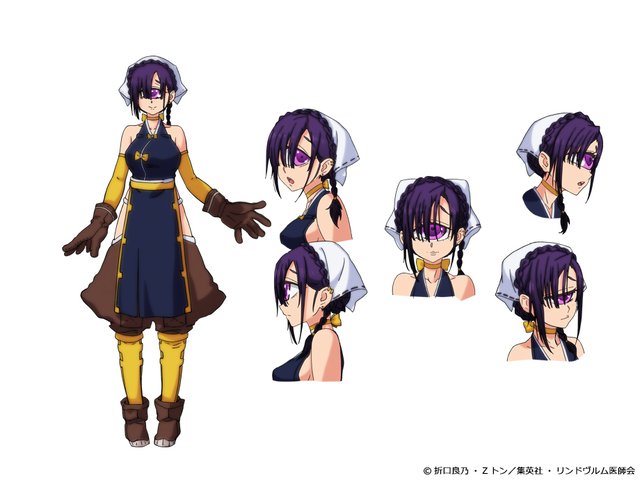 Artisan apprentice cyclops girl. A promising disciple of a male household, "Kukuro Kobo", expected from his master. It is characterized by a huge one eye, but because of his masochistic nature, he himself is a complex with big eyes. I am suspicious of social phobia and sometimes become suspicious. He has a surprising hobby that he likes Gothic loli, but he basically hides it. Despite struggling with Lulara's personality, who is of the same generation and who has the opposite personality, I don't hate getting a call. He is a very dexterous tribe and has excellent craftsmanship such as weapons. 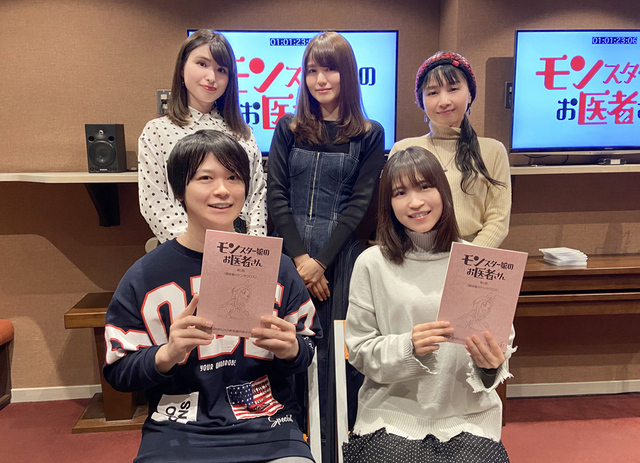 ・ Question (1): Please tell us your impression when you decided to appear in "Monster Girl Doctor".
・ Question (2): Please give a message to fans who are looking forward to anime.

■ Junichi Toki (as Glenn Litobite) [Left front row in the photo]
(1) By playing the protagonist for the first time, I thought it would be good news for those who have supported me up to now! I want to do my best to deliver wonderful works to everyone more attractively!
(2) The characters who appear are being played by wonderful casts! ! If something happens to the monster's body ... Every story, I see! ! Just think! There is no doubt that you will be satisfied! Please expect by all means!

■ Saori Onishi (Surfentit Nakes) [Right in the front row of the photo]
(1) Since the audition, I had been enjoying the surfing and playing at ease . I will play a naughty surfing with all my strength while supporting Mr. Glen! !
(2) Cute monster girls move with animation! The appearance of the character also has an impact, but each character has its own personality and it is very nice, so please look forward to it! ... Lamia's tail is useful ... I feel that through post-recording (laughs).

■ Bride Cut Sara Emi (as Tissalia Scutiare) [left in the back row of the photo]
(1) I was very happy! From the stage of the audition, playing Tisalia was very fun and fun, so I was even more happy when it was decided!
(2) Which monster girl do you like? There are so many different characters, so please pay attention to Mr. Glenn's treatment and find your favorite monster. Please enjoy until the last story!
Tisalia / Bridkat Sara Emi

■ Yukiyo Fujii (as Lulala Heine) [Center in the back row of the photo]
(1) Lulala had a pretty appearance, but had a hard time surprisingly, but she was a bright, strong and hard-working child. It was a character that could be played freely and freely, so I was happy to decide!
(2) In a different world where humans and various demons live, any kind of monster will be healed by the kindness of Dr. Glen, who treats his treatment seriously without any separation. I think the scene of the treatment of the cute monster girls is a little sexy ...? It's just a medical practice! Enjoy the fantasy world with monsters, medical, romantic comedy!

■ Yu Shimamura (as Aranya Tarantera Arachnida) [Right in the back row of the photo]
(1) Alanya Tarantella Araknida ... It's a long and difficult name. Actually, I thought I fell for the audition. The script of the recording arrives at hand and looks at the incense table and is surprised! To be honest, I was filled with my feelings, "Let's do Alagna's dialect!"
(2) Lamia, Centaur, Arachne, and times are monsters. Very personally fresh. There seem to be many things to be challenged in performing. Please look forward to the world of animated monster girls.

Synopsis, scenes, and notices of the 3rd episode of "Sheton Gakuen", "Things to Love and Take Off-The Story of Miki, King, and Shiho-" will be released on January 20, TV anime broadcast on TOKYO MX an ...

New edition of "Re: Life in a Different World from Zero" on air, episode 4 & episode 5 released!

Synopsis of episodes 4 and 5 is released from the new edition of `` Re: Life in a Different World Starting from Zero '', which started broadcasting on January 1, 2020 (Wednesday) on AT-X, TOKYO MX, BS ...

Synopsis, scenes, and notices of the 7th episode "The Wild Habits of Troubled Beasts-The Story of Jena and Teru", a TV anime broadcast on TOKYO MX and other sites starting February 17th, are released. ...

PREV
The second season of the TV anime "Tobisura" will start
NEXT
"Single Doriva of the Wings" will be broadcast in July 2020!