The final chapter of the theater trilogy "Theatrical Version Fate / stay night [Heaven's Feel] @. Spring song" will be released on March 28. The story of "Heaven's Feel", which is first visualized in the original game, is finally completed in this work. We talked to Noriaki Sugiyama, the role of Shiro Emiya, and Noriko Shimoya, the role of the main heroine, Sakura Matou, as he looked back on the impressive scenes from Chapter 2 of the previous work, and heard his feelings toward the recording of the final chapter. (Interview and composition: Kotaro Gosho / Animation Hack Editor)

――Please tell us your impression of watching the completed video in Chapter 2.

Sugiyama: My first impression was that it was amazing. The battle between Lancer and Shin Assassin on the highway in Chapter 1 was a speed battle, but the battle between Saber Alter and Berserker in Chapter 2 was a power battle, and the extraordinary power and power of Berserker and its cool face I saw the contrast of the Saber alter that passes by. I wonder if the mythical battle is like this-I haven't seen it (laughs)-it was so strong that I felt like that.

Shimotaya: In Chapter 2, I think that there were many scenes where cherry blossoms revealed their feelings. In the first chapter, there was a scene where cherry blossoms were telling memories to Shiro at the storehouse, but at that time, I felt that Sakura was the first time to talk about myself like this. Such a cherry tree in the rain scene of Chapter 2 says, `` I am not a human being worthy of my senior '' and reveals himself and pushes Shiro out . The story was also accelerating, and in the wake of the last shock that cherry blossoms would become “Makiri no cup”, I think that the contents were shocking to the viewer.

-In an interview before the release of Chapter 2 ( https://anime.eiga.com/news/107705/ ), there was a scene that was praised as being a good reproduction of the expression unique to a novel game in a movie. Which scene was it?

Shimoya: That's the cherry blossom scene. In the movie, the content that can be expressed only in text was drawn from the viewpoint that Sakura dreamed, and it was really wonderful to directly connect it to the real world with Gilgamesh.

Sugiyama: It was cruelly described why the cherry blossoms had ever been sane. 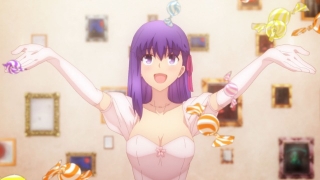 ――That dream scene is fancy if you only look at the picture, but I think people who watch the movie look completely different.

Shimoya: Thank you, thanks recently, when you tweeted "I'm hungry" on Twitter, people often say, "How about candy?"

――The cherry blossoms in Chapter 2 were also jealous of Rin (Tohsaka).

Shimoya: For Sakura, Shiro is different from the desire to associate or to make one's own, but I think it's an irreplaceable and important person. That's the same storehouse as in Chapter 1 that I talked about earlier, but this time Rin tells Shiro a memorial story in the same way. Everything is better than myself and my sister gets memorable memories with my seniors. I understand the feeling of the cherry tree so painfully.

――I think that Chapter 2 was also a story where Shiro's justice fluctuated.

Sugiyama: If you thought Sakura had lived a normal life, it wasn't. Shiro learned about the harsh conditions that the cherry blossoms grew up in, and wondered who would be able to save her, and thought that she had to save her. This did not mean that the desire to help as many people as justice was gone, but that he had to "help from the person in front of him" and his priorities had changed. I suppose that was the place that Shiro could not afford. I think that there was a side that made him feel that the image of justice that he envisioned was large.

Shiro with a kitchen knife entered the bedroom with the cherry blossoms, and there were scenes of severe conflict.

Sugiyama: It is said to visceral inkstone that many people will be killed or unhappy if cherry tree is not killed, and while thinking that it must be avoided, it is probably the aim of visceral inkstone that Shiro said I think you are aware. I guess, despite the unimaginable conflict, I came to the conclusion that Shiro could still do something before he decided to eliminate the cherry blossoms. It may be gray instead of white or black, but did you bet on finding the next best thing?

Shimotaya: At the post-recording site, I saw Sugiyama play the scene from behind, but I was sick as Shiro cried. It seems that the tears of the cherry blossoms seem to have caused the suffering that has made their beloved seniors so much…. I think that after that, the cherry blossoms decided to return to Maki's house and stop the inkstone afterwards. I was really moved by that scene.

――Please tell us your impression when you read the script in Chapter 3 that concludes.

Sugiyama: I can't tell you in detail, but it was more about emotions, rather than solid emotions. Not only Shiro and Sakura, but also the characters that surround them, such as Rin, Ilya, Kirei, Visceral Ink, and Riders, are drawn deeply. It was impressive that the emotion was drawn very delicately at the same time as being dynamic. 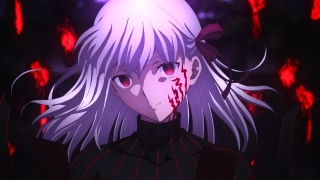 Shimotaya: As Mr. Sugiyama said, the characters around him were carefully depicted, and I could feel the love of cherry blossoms by Director Sudo (Yutoku) everywhere. In Chapter 2, the process of cherry blossoms becoming Makiri cups was well described, but in Chapter 3, her thoughts and conflicts in Makiri cups are depicted. In the first half, there was a place where I worked on making roles while discussing with Director Sudo, but in the late stage it was easy to convey to the viewer, and even though I was playing, I was drawing how to enter smoothly, I felt it was the love of Director Sudo, "I want everyone to see these parts of the cherry blossoms."
I was prepared to be harsh, but when I actually performed, I thought, "It's fierce." This is the culmination of "Fate / stay night", and maybe the last to play "Heaven's Feel" cherry blossoms. No matter how fierce the fate, she challenged her with a desire to confront her and perform to the end.

Sugiyama: "Heaven's Feel" ends in a different way from the other two routes. What did Shiro's choices lead to, and what will happen to them? There's a lot of room to think about that after you've finished watching it. At the end of the three deep routes, there is still room for expanding the wings of the imagination, and I felt it was a hatred production.

-16 years have passed since the release of "Fate / stay night". Last but not least, what are your feelings for facing the character for a long time?

Sugiyama: When I heard that it was 16 years ago, I thought, "It's amazing. I'm honored to be involved," and at the same time, as an actor, I'm also surprised that it's been so long. I have been playing in various media, such as derivative works and games, but I am not playing timely, and I am not really vacant. I don't think it's an impression that "I'm doing it all the time" because I spend a lot of time with great works.

Shimotaya: I thought it was too fast, but when I saw the TYPE-MOON exhibition that was held to commemorate the 15th anniversary, I felt the importance of the history of 15 years. Especially in the three years from 2017, when the movie "Heaven's Feel" started, it was really a year and a year, and the chances for the actors to meet each other increased. It's kind of like a gathering of relatives because I know them for a long time (laughs). Like these interviews, I also spend a lot of time with this "family" at events and I feel that it is the happiest time.

Synopsis and scenes of the twelfth mystery "Mermaid Princess", a TV anime broadcast on TBS and others from March 26, "Hijiko Shonen", have been released. . . . . Light reunites with Mitsuba, a new mys ...

In 2019, the number of theatrical animations increased dramatically, the animator became the main character in the NHK morning TV series `` Natsuzora '', and the anime industry in the early days was t ...

PREV
"Weak character Tomozaki-kun" decided to be animated on TV!
NEXT
"When Higurashi is out" Broadcast starts in July