"Neat but if you go to Hallowa, you've been in a different world", the latest three volumes will be released in April!

The third volume of "Neat but if you go to Hallowa, you've been in a different world" will be released in April 2020, a popular series in the web comic magazine "Comic Valkyrie".

A popular novel series in the web comic magazine "Comic Valkyrie" distributed by Kill Time Communication, "Neat but if you go to Hallowa, you went to a different world" is a novel by Kasuga Katsuga who is very popular with "Let's become a novelist" It is a comicalized work that Itsuki Takano made into a manga.

At Hello Work, NEET Masano Yamano, who saw a job offer for test play of a certain game, was immediately transferred from the interview venue to another world.
My job was to fulfill certain conditions or survive for 20 years in a different world that will be destroyed within 20 years!? I
will do my best in Masaru in a world destined for destruction, Razgrad World Adventure life begins!

The release of the latest three volumes of this work depicting such a different world life was decided in April.

In addition, Mr. Natsuki Hanae has voiced the acclaimed PV that has been viewed more than 10,000 times, so please check it out.

[Product Information]
■ Valkyrie Comics "I'm a neat but if I go to Hellowa, I'm taken to a different world 1"

■ Valkyrie Comics "It's a neat but if you go to Hellowa, you've taken along another world 2" 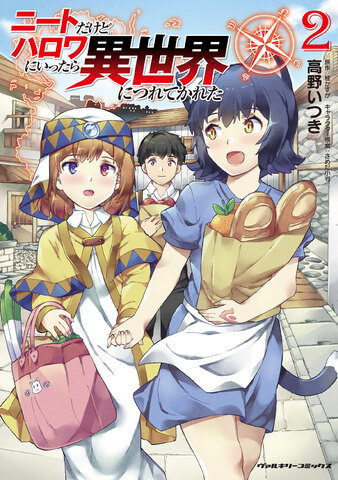 We picked up the main works from the Amazon and Kindle version comics that started distribution “Shin Ikki Tousen”, “Futo Detective”, “Young lady wants to be a hero of romantic comedy!”, “Flock Nanase ...

The first to sixth BDs of the anime "One Punch Man Season 2" are being released. The opening video of the OVA "Puripuri Prisoner and Jailbreak Prisoners" included in Volume 5 has been released, along ...

SIE (Sony Interactive Entertainment) has released information on an update to be performed in April 2020 on PlayStation Plus (PS Plus). Added "Uncharted Pirate King and Last Treasure PlayStation Hit" ...

PREV
“Gibiet”
NEXT
"Hinamatsuri" and "Mimi's Day" special plan "Please My Melody" will be delivered for free!