Exclusive distribution of Hollywood live-action drama "ONE PIECE" on Netflix!

The popular manga "ONE PIECE", whose live-action had already been announced in 2017, was officially announced on January 30, 2020, to be distributed as the Netflix original series "ONE PIECE".

"ONE PIECE" is a popular comic serialized by Eiichiro Oda in "Weekly Shonen Jump" since 1997. The total circulation has exceeded 460 million copies, and it has been loved for many years.

This work that there were many offers of live-action filming in the past. Oda-san and the Weekly Shonen Jump Editorial Department were convinced that they could overcome various hurdles, so the live-action was realized.

For the live-action, Netflix has partnered with Tomorrow Studios, one of Hollywood's leading studios to produce the live-action version of the popular anime Cowboy Bebop, and Shueisha.

A comment from Oda has arrived, so let me introduce it below.

・ Eiichiro Oda commented,
“We announced the production in 2017, but it takes time! Various preparations are underway all the time. It seems that we can announce this this time. That world's best video distribution The service Netflix has greatly helped me! Encouraging! How far will the story progress in season I 10 episodes? What will the casting be ?! Please wait a little longer and expect! " 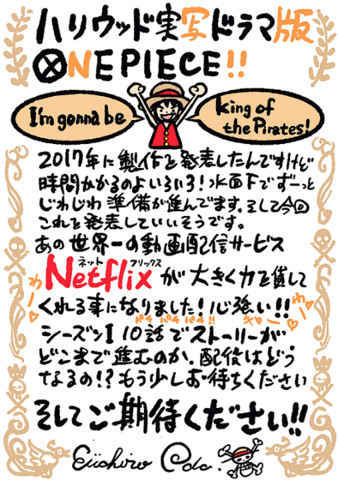 We will tell about the distribution date of this work and the cast as soon as the follow-up report comes in.