The TV animation broadcast date of "Kakashigoto", originally written by Koji Kumeda, which will be turned into a TV animation in April 2020, has been decided. In addition, the Kakushi version of the visual and PV have been released.

"Kakoshigoto" is a manga by Koji Kumeda serialized in "Monthly Shonen Magazine" (Kodansha). The main character is Kakuji Goto, a manga artist who draws a little vulgar manga. She spends every day worried about her important daughter, Princess Goto, that she would be disliked if she was a manga artist. This work depicts a family story of “Love and laughter, a little touching”.
In making the animation, it was decided that Hiroshi Kamiya will play his father, Kakushi Goto, and Riyori Takahashi will play his daughter, Princess Goto. The director is Yuta Murano, the series composition and screenplay is Takashi Aoshima, the music is Yukari Hashimoto, and the animation production is Asa Ado.
⇒ blockbuster of kōji kumeta "secret" is 2020 April animated! The main cast will be Hiroshi Kamiya & Riyori Takahashi.

This time, it has been decided that the TV animation will be broadcast on April 2, 2020 at TOKYO MX, Sun TV, BS NTV, and AT-X.

In addition, TOKYO MX has decided to conduct a morning family broadcast at 11:00 am every Sunday from April 5. It is currently being eagerly produced as a work that parents and children can enjoy on Sunday morning.

A visual / PV featuring Kakushi Goto was also released at the same time.
In the PV, the voice by Hiroshi Kamiya, the role of Kakushi, has also been lifted. We want you to enjoy Kakushi, who works as a father and as a manga artist, thinking of his only daughter, the princess.
Along with the release of Goto Kakushi Visual, the official site's TOP visual has also been renewed, so be sure to check it out.

In addition, a gift campaign with autographed colored paper by Hiroshi Kamiya, the role of Kakushi Goto, has started on the official Twitter, so please apply by all means.

Kakeshi's visuals and the release of the PV means that the princess is ...? We look forward to seeing you in the

The visual version of Kakushi Goto has been released.

Under the vivid blue sky symbolized by the work, Kakushi is working as a father and as a manga artist. 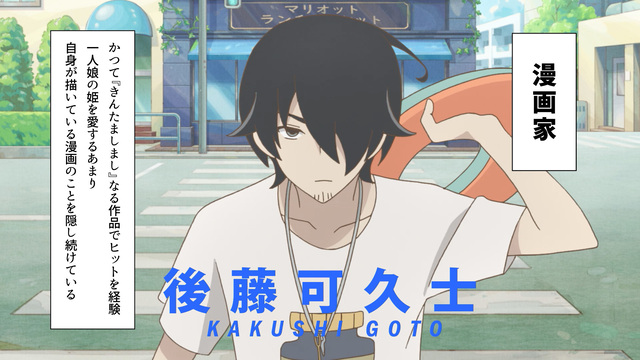 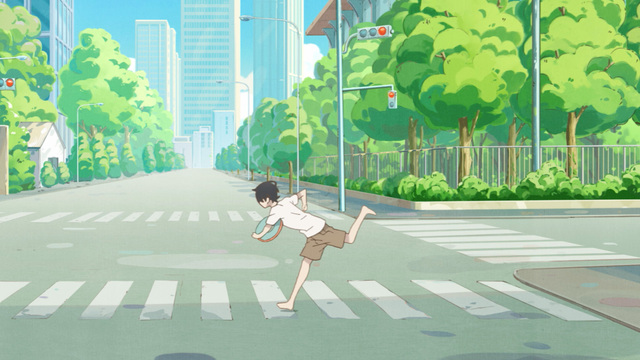 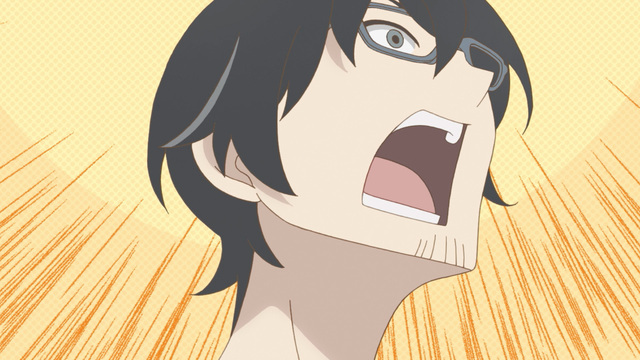 A voice by Hiroshi Kamiya, the role of Kakushi Goto, was released for the first time.
Kakushi's character PV that keeps hiding herself as a manga artist and the manga she is drawing from her only daughter has been released.
Don't miss the attention because Kakushi who shouts "Princess? !!"

* Broadcast dates and times are subject to change. * Family broadcasting in the morning will be a
repeat broadcast. 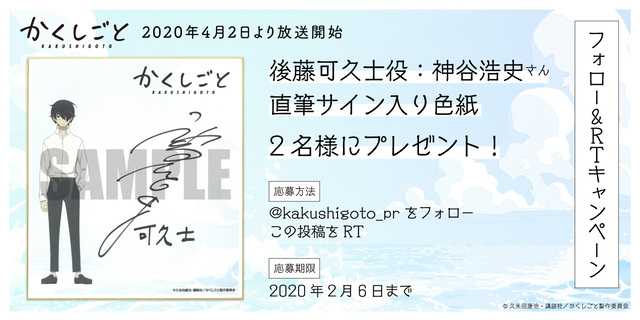 From today to February 6, the follow-up and RT campaign, in which two colored papers signed by Mr. Koji Goto and Hiroshi Kamiya, are signed by the TV anime “Kakoshigoto” Official Twitter (@kakushigoto_pr)!

* Broadcast dates and times are subject to change. * Family broadcasting in the morning will be a
repeat broadcast.

<Introduction>
Kakuji Goto, a cartoonist who is drawing a little vulgar manga.
Princess of fourth grader of the only daughter.

In Kakushi, her daughter and princess have the highest priority.

Don't want your daughter, princess to know your idiot, Kakushi.
That is ...
my job is "manga artist".

If my “secret” is known, my
daughter would dislike it! ?

The release date of "Movie Doraemon Nobita's New Dinosaur", which had been postponed due to the spread of the new coronavirus, was decided on August 7. Advance tickets currently on hand can be used af ...

PREV
TV anime of "Fuyu Senki"
NEXT
"Muhyo and Rosie's Magical Legal Consulting Office" will be broadcast in the summer season. Teaser PV