Published by Gagaga Bunko (Shogakukan) since 2011, the popular light novel "Ore Gail" by the original author Watari Watari and illustration Pangkan (8) "Is my youth romantic comedy wrong. Is a story in which a twisted high school student's main character, Hikiya Hachiman, joins the Service Department and unfolds a youth full of mistakes with Yukino Yukinoshita, the most beautiful girl in the school.

This work was ranked No. 1 in the work category for the third consecutive year at Takarajimasha's "This light novel is amazing! 2014-2016", and also entered the Hall of Fame. In addition, it won the 1st SUGOI JAPAN Award 2015 in the Ranobe category. Following two TV animations, it was also made into a game. And it has been decided that the third season of TV anime, “My youth romantic comedy is wrong. Complete” will be broadcast in the spring of 2020.
⇒ TV animation "After all, my youth romantic comedy is wrong." Iroha's celebration visual is also announced!

In addition, the Animate campaign for Angkor Press has been lifted, so we will introduce it as well.

All 7 volumes of Blu-ray released in 2013 have been re-authored into a compact and easy-to-view form with two main parts and one video bonus. The bonus CD includes a newly recorded version of the popular "Sobu High School Service Club Radio" which was distributed during the first broadcast of the anime. A booklet re-editing each story commentary and illustration collection by traveling the original author is also included! As a video privilege, animation event video, location video "My sightseeing in Chiba is wrong." The encore press privilege is Wataru Watari's newly written short story I, "I always want Hikiya Komachi to have a sister-in-law."
* This product is the same as the first limited edition released on March 4, 2015.

■ After all, my youth romantic comedy is wrong. Continued Blu-ray BOX <Encore Press> 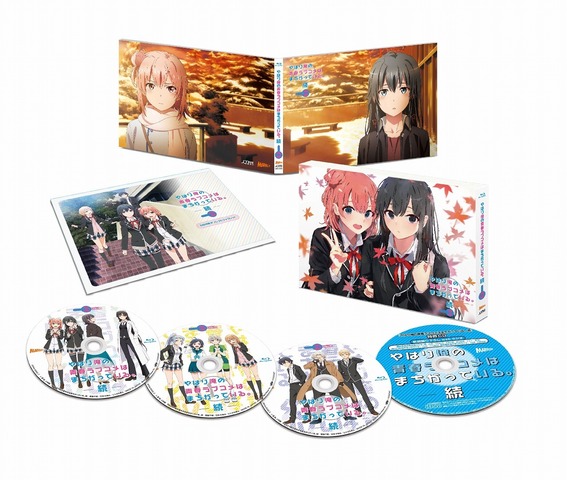 Re-authoring all seven volumes of Blu-ray released in 2015 to 2016 into a compact and easy-to-view form with two main parts and one video privilege. The bonus CD will be distributed at the time of the anime broadcast and will be newly recorded by the popular "Sobu High School Service Club Radio." Newly recorded "Sobu High School Service Club Radio. Recorded. As a video privilege, animation event video, cast variety "This service department is wrong." The encore press privilege is Wataru Watari's newly written short story II "But still, Hikiya Komachi won't give up on her sister!"
* This product is the same as the first limited production version released on October 25, 2017

We will be holding a campaign at each Animate store to commemorate the launch of the TV anime “My youth romantic comedy is wrong. Kan,” and the launch of the first and second Blu-ray BOX <Encore Press>!
During the period, those who purchase the following target products at the target stores will receive a "special clear bookmark 4 piece set" (2 types in total)!
As soon as the quantity is limited! !


<Benefits>
"Special clear bookmark 4 sheets set" (2 types in total)
* The pattern of the 4 sheets set is "Yawata, Yukino, Yui, Iroha"
* You can choose the type of set.

<Notes>
* The delivery method differs for Animate Online. See Animate Online HP for details.
* All prizes, benefits, signatures, application tickets, vouchers, etc., related to the measure are prohibited from being transferred to third parties or resold at auctions.
* The number of benefits is limited. It will end as soon as it is gone. Please note

Popular picture book character "Babapapa" collaborates with "Crispy Cream Donut". From Wednesday, February 26, 2020 to the end of April, three types of barbapa donut will be sold at Crispy Cream Donut ...

PREV
In April 2020, the TV anime “Shigutsugumo”
NEXT
TV anime "Laughing on the runway" 3