Mayu Uchida, who successfully performed the final performance of "UCHIDA MAAYA Zepp Tour 2019" we are here "" on December 16, 2019. Looking back, it was a wonderful tour. It was a high level of entertainment and performance.

Despite the live house, it was a wonderful stage combined with flashy effects such as special effects and lasers. That, of course, is the result of a lot of live shows and the result of her efforts. The feeling of team with the band and the staff, and the fruit of the trusting relationship with the fans was the call and response at that "Resonance Raison d'etre", and the next step was that the venue resonated with that song. In other words, I think it was a necessary process to go to Yokohama Arena.

By the way, the voice of the tour was enthusiastically spoken, and the voice actor Mae Uchida, a non-resting artist, reported on the daytime part of the birthday event `` Maaya Happy Birthday Party !! 2019 '' held the day after she turned 30. . 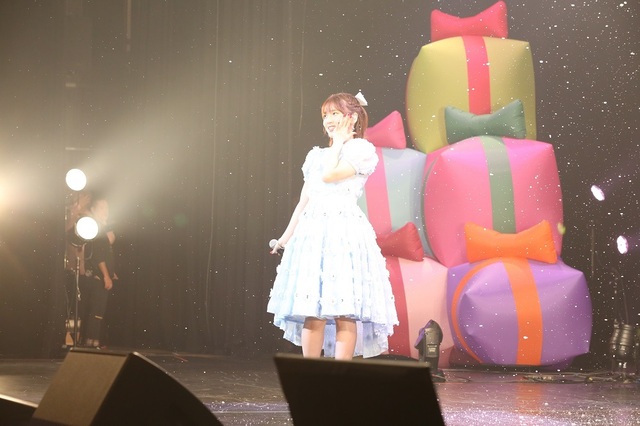 The opening is "Winter has come" with falling snow. From the beginning, I forgot about the cold of winter due to too much glare. At the end of the song, the place where you put your left hand on the cheek and smile is the idol itself.

That should be it. Immediately after that, a writer who works as MC, Mr. Chanko, appeared, but as for the costume, he said, "I want to make it an idol costume. The image is Seiko!" Because the Zepp tour was based on coolness and intenseness, it seems that there was also a reaction to that. And don't forget the ceremony: Fans gathered at the venue to hear “Happy birthday!” And a big smile spills out. 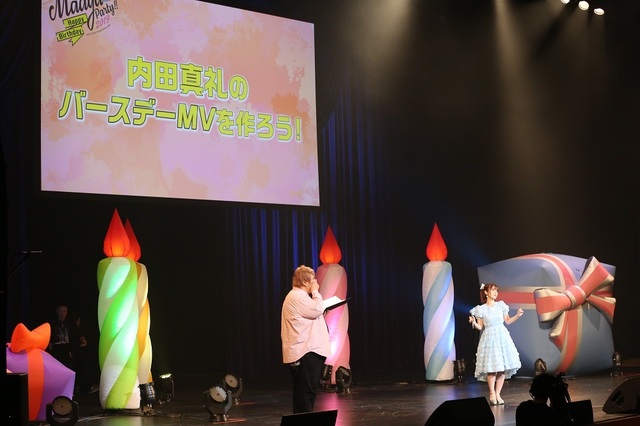 Next is the variety corner. This time, the theme was "Let's make a birthday MV for Mayu Uchida", and the plan was to create a MV for the event. The song was performed at a birthday event two years ago, "Because my birthday!" It is a matter of deciding material shooting by lottery. For example, in the case of "a scene where everyone is playing a party game", it is a flow of shooting a scene like that on the stage. So, the extra role of the shoot was driven by music producer Akihiro Tomita, the unfamiliar bandmaster of Maaya band Katsuhiko Kurosu, and event staff Tokio. Of course, Mr. Chanko also participates and shoots more and more. Mr. Kurosu who blows soap bubbles was very valuable because I think he could only be seen here. After that, I was shooting a variety of materials, such as doing waves at the venue, but Mae-san's movements during the shooting were too professional, and it was amazing. I'm afraid, but I'm conscious of the camera properly and the expression is rich, so it's easy to imagine that this is a real MV shooting site, and if you get more serious, it will become a more attractive visual It's done. 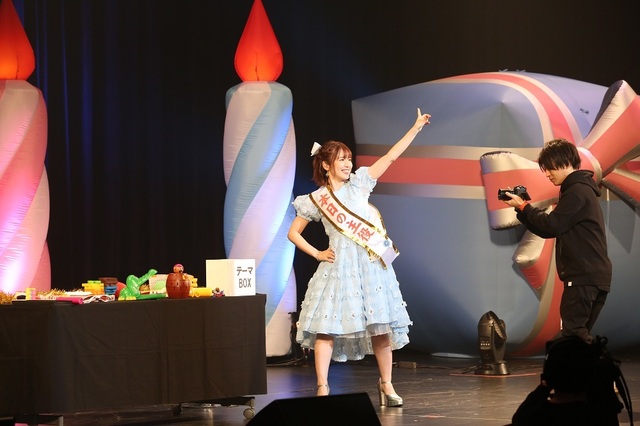 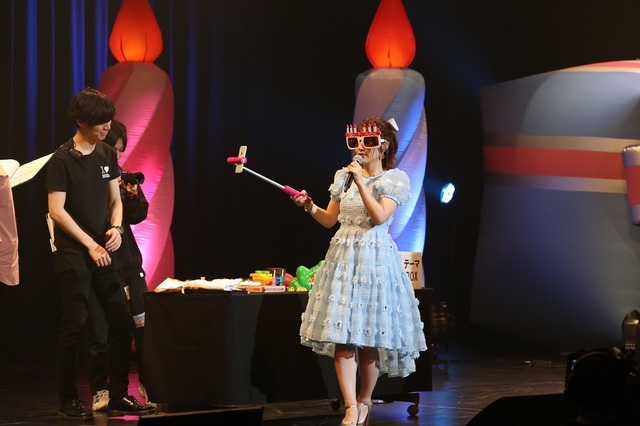 Well, the shooting is over, and the event goes on while the staff is working behind the scenes. In the “30th Anniversary Commemorative Project! Well History”, she looks back on her history while watching photos of kindergarten and graduation ceremonies. As it was 30 years old, the topic was extended to the latest Zepp tour, but "I thought that the experience value of Masare-chan was up and I thought that performance and singing had grown," said Kurosu. "The power on the stage was amazing," said Tomita. Also about the age of 30 years. "When I was about 22-23 years old, I didn't feel right. I was playing about 28 and I wasn't very young, so now it's really nice. I feel like I'm the right age. 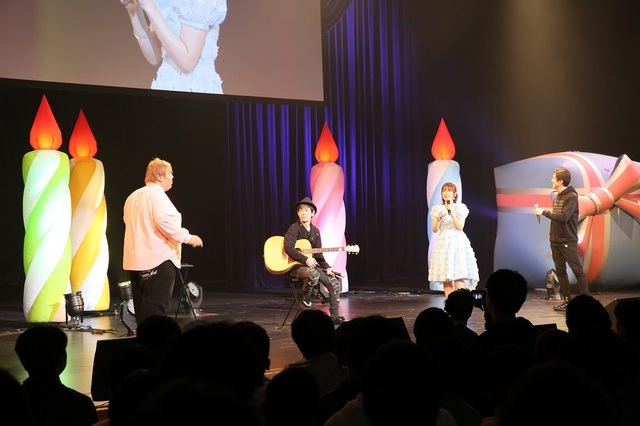 In conjunction with this retrospective plan, a karaoke section was held in which the songs that were being listened to during student days were sung one chorus at a time. She sang "Cherry" (Ai Otsuka), "Sorrow for gentleness" (little by little), and when she was aiming to be a voice actor, she sang "Sekisei no Aquarion", which she often sang. . In terms of "Karaoke Uchida's Karaoke" that you wouldn't normally listen to, this was a unique event for a birthday event.

Then, once you leave the stage to prepare for a live singing your own song, the image will be played on the screen. It was a new video by the two-person unit "Shonan Orange" composed of Mikan-chan = Maaya Uchida and Shonan-kun = Chanko, but the content is that Mikan-chan makes a surprise to Shonan-kun. At a meeting where Mr. Uchida fights with the staff and the mood is intense, Mr. Chanko appears. How do you do it? However, "Angry Maaya Uchida" was quite rare and quite interesting. 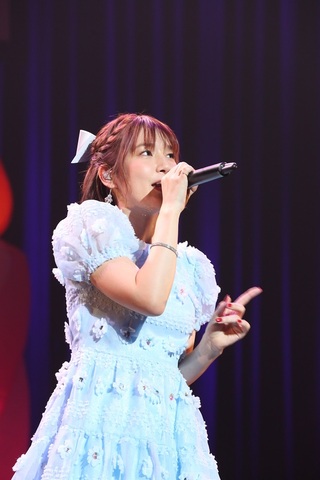 In the mini live corner, "My stage" is performed while playing past photos. Then, "Craft Sweet Heart," which cheers just after the microphone stand was placed, sang "Because My Birthday!" In this song, the guest who had just been on the stage was called in and sang happily, but the last scene was buzzing. "Is it okay to see it again? Anyway, I can do it anyway." And once again, we all watch the video to take a closer look at the MV. Then, at the end of the MV, someone's image is instantly displayed like a subliminal effect.

I think Hawks fans knew it in one shot, and Uchida himself probably already knew it at the beginning, but in 2019, Hoki's rookie, Nakano Kai, who was a newcomer, was showing for a moment. Here, as a surprise, Kaino will once again send a birthday message video to Maaya Uchida.

After that, a champagne set was presented by the staff, and at the end, another song “To be your heroine” was sung, everyone waved their hands to the left and right and finished the live with a smile.

Finally, as a nicer present, we will record the clapping of the next song at the venue. It was a pretty thick crap, so I'm looking forward to seeing how it will be used. In addition, the fan club event “LIVE IS LIKE A SUNNY DAY ♫” Vol.3 will be held on April 18 (Sat) at Omiya Sonic City Large Hall and on April 26 (Sun) at Zepp Namba (OSAKA). Announcement. Another pleasure was added. 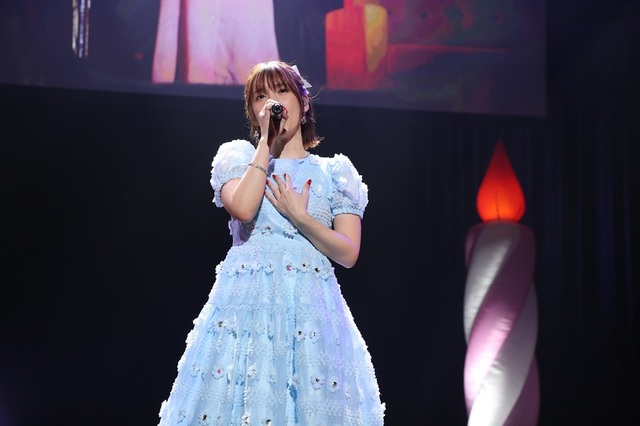 However, one of the major goals of 2020 will be a one-man live at the Yokohama Arena on Sunday, July 5th. At the end, Mae-ryu says, "I'm living on my birthday and staying the same. I feel like I can go one step further as a voice actor with my feet on the ground. I think that you can expect even more from Mae Uchida. I am waiting for the side ants (laughs). I will swear here that the sun will illuminate everyone from now on. " Was dropped.

I don't think it's easy to always smile, but she can. Of course, I don't think it's always the case, but he said at the tour final the other day that he didn't show it. That's why she wants to believe and want to keep up. At the Yokohama Arena, you should be able to meet her with the best smile again.

Campaign to receive original goods of "Re: Life in a different world from zero" at Sega game center starts from February 22

From "My Hero Academia", "8 Million Hundred Hero Suit Ver." Figures will be released!

From October 2019, it is decided that a 1/8 scale figure of a hero suit of `` 8 million hundreds '' appearing in `` My Hero Academia '' which is broadcasting TV animation 4th term will be released in ...

Good Smile Company has decided to release "Kanamori's Backpack", which will appear in the anime "Don't touch the video lab!" From May 29, 2020 (Fri), and reservations have started. . The price is 13,5 ...

It has been decided that three models of "Gundam & Hello Kitty Voice Body Composition Monitor" will be released. The price is 20,000 yen each (excluding tax). It will be available for preorder onl ...