To commemorate the long-awaited start of the broadcast, we asked Daisuke Ono, the role of Golem, and Inori Minase, the role of Somali, about the highlights of the work.

印象 Please tell us your impression of reading the original comic of “Somali and the God of the Forest”.

Ono: When I first read, I thought, "The drawing is amazing!" For example, in a place like the background or the world view, the amount of information received from the picture was so great that I thought it was very warm. How much time is being spent here? I was impressed by the moment that the golem has lived for nearly a thousand years.

Minase: I felt like a simple love, and there was also a sense of security without flashy things. I was reading while thinking about playing Somali, so I was paying attention to the lines in Somali, but the words in Somali are very simple in expressing emotions. There's no excuse, little protection, or anything like that. Is it like a child who chooses words that spat out what they thought? On the other hand, I felt like I was an adult, and I felt like, "There are things that can be transmitted at least with words!" I guess when I grow up, there are many words. After reading it, I felt like learning something moral. 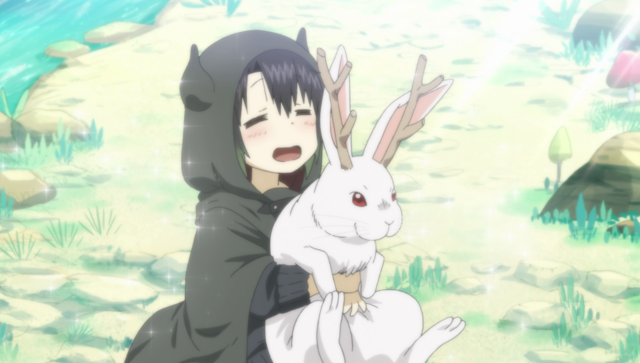 ど ん な What did you notice when you played the character?

Ono: Golems are not humans. There are absolutely no blurs in the settings and no exceptions. For me, my career as a voice actor that expresses emotions and expresses that human beings live, I felt like I was deprived of all my work skills (laughs). So first, "This is difficult ..." However, I felt that the sound of my voice and the experience I had cultivated as an actor could be put into my voice as sound. I had no feelings, but I was spinning words while thinking that I wanted to make a voice that would make me feel alive, feeling, calm, warmth. Also, Inori-chan's Somali will make up for the parts I've cut off and make it a plus, so I was just careful with the balance.

Minase Somali and Dad are in a relationship where they feel and give each other various feelings, but they are not conscious of giving, but feelings of sprouting each other in the time spent together, I thought something like that. He's always a golem, so he doesn't always respond (laughs), but he always believes that he has arrived and wants to go with him. That's why in the script, the answer like "Dad" is cut off, but in my heart, I feel like something while Dad is catching Somali's words, the next line I was trying to say. That's why Somali always laughs, crys, messes with her, and gets angry with her best.

── Did you get any words from the director that couldn't help you?

Regarding Ono Golem, where there is no emotion, I was required to play where the emotions overflowed, but I was told that even if it came out in the test, I hope that it can be suppressed in the actual production. Was. I was really grateful for the work. Because I don't know how I feel when I receive the Somali line, even if I do it alone at home. However, there were things that grew up when I came to the post-recording studio, so it was great that I let them go and then drop them into a golem dad.

Minase: When I saw the picture, was she a boyish girl? I was auditioning while thinking, "I was pretty good at being a girl." I thought that a place like a boy with an adventurous spirit was one of her charms ... The voice could be high, so when I made it, the manager confirmed, "Is it quite high but is it OK?" But "I can do it! I'll do it!" The key itself is high, but the ending is "~~!" Or "I'm going!" "I understand!" Was. 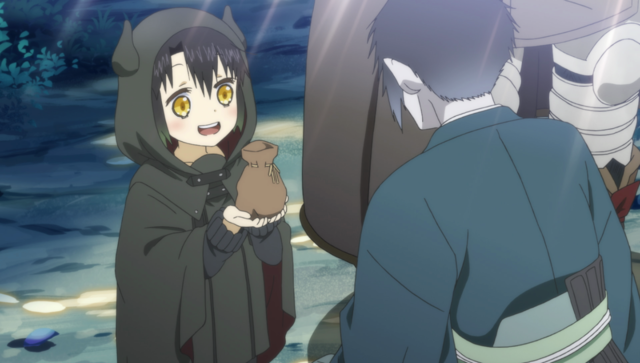 By the way, do you think it's the first time that the two have played together in a close relationship like a parent and child, but please tell us your impression of hearing each other's voices.

Mr. Minase has a sense of security because it does not change. As we talk to each other, we can see that if we say this somehow, we will get back. (Characteristic) There is no such irregularity as "what kind of strange thing will be returned?", And it will definitely be returned by the father I had imagined. No matter how much Somali spreads the furoshiki, Dad will return it there, so it's very easy to do, fun and fun to spread.

Ono: That's true. You can imagine. I wonder if they will always return this. I am grateful for Inori-chan saying so, and I am glad I did this play. But I don't want to shake my dad (laughs), she's grinning. It's like, "Oh, Somali."

Ono: That looks so (laughs). The more inori-chan does so and the more he moves and plays, the more his play will stand. I guess that because they cry a lot, the voices afterwards can be heard gently. That's why a golem can't be described as me alone. I don't think it would be impossible to say, "Please do only the golem, please!" I think if I leave out Somali, I will refuse "I can't!" (Laughs).

I have no experience calling my dad

Do you have any fun or difficult things playing in ──?

Minase Fun is where you can call it "Dad". I myself called my real dad "Daddy", so I have no experience calling him. However, when I grew up, my father and mother seemed to be good words, and I was really happy to call him "Dad". In fact, my father's name is also Daisuke (laughs). Is this a coincidence or an inevitable one? So I'm glad there is a double meaning.

The difficult part was until the first post-recording episode. When I was practicing at my house, I didn't know what kind of atmosphere it would be like ... However, it was not difficult after the recording of one episode, and the characters Somali and Dad came into myself. Is it possible to dispel everything that you thought was difficult? The future reproduction of the story caught up in my mind, and I was able to imagine "I'll do this here", so it's not difficult.

Ono The difficult part is to suppress the emotions I mentioned earlier, but the fun part is that I was able to see the surroundings on the post-recording. If anything, I can go to the recipient, so it's really fun when I'm looking behind. Even when I'm only talking about Somali, I'm laughing with such feelings and crying while thinking about something like this. I was able to see such a thing while thinking "I'm good", so I thought I was in the best position.

──Are there any places in your work that you would like to visit?

I thought that Ono bar was like a dining room. There was a scene where I was a waiter, but it was very nice. The scene there was a little more puffy when it was an anime, but it was fun. There are a lot of strangers, and the gay guys there are very particular about the sound director, so everyone is a different race. That's why I was told, "It's better to deviate from humans in terms of voice quality and talking content, so please do it in a darker way." Golems have to be done in the same tone all the time, so I feel depressed (laughs).

Did you get a fat character just here in Minase ?

That Minase ? I have this week too! (Laughs)

Ono , he's always there. I've been interacting with Yuu Kobayashi with fat characters all the time.

Minase seemed to be happy (laughs).

Because I 'm Ono, I want to go to the cafeteria (laughs).

Minase I like reading books, so I'm a witch's library. The whole room is like a bookcase. There are a wide variety of different genres, and there is a lot to know about the history of each land, a pictorial book, and unknown unknown worlds. One day is probably not enough, and it looks really fun. 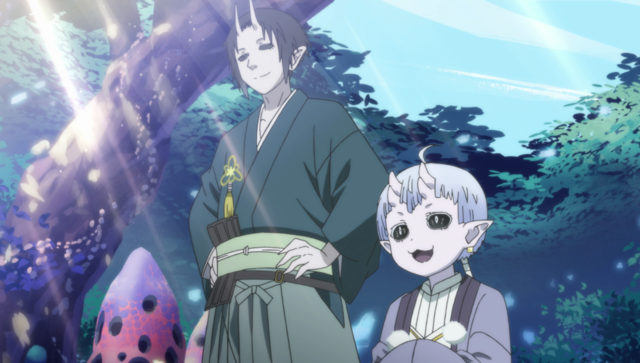 ──Please tell us the highlights of the anime.

If you are reading the original story of Minase , I think that you will be looking forward to where you go, what kind of encounters you have, and what kind of voices are attached to the characters. There are no regulars other than us, so I would like you to pay attention to the guest character casts every time. Because it is quite dark from the first episode!

Ono I want you to look forward to the gorgeous guest voice actors. The whale of the first episode was also talking very much (laugh). Mr. Whale came out as Gama-Ba, but it was very fun and he excited the site from the beginning.

──Because it is not a human role, I'm looking forward to what kind of play you do.

Ono: Someone who can hardly imagine comes. However, everyone is perfect.

Minase eh? The cast came and we were impressed with "Uoooo!"

──I'm looking forward to it. Finally, what do you think this work will look like after you finish it?

When I read Ono's original comic, I felt warm and thought that I was drawing parent-child love, but when I played it, I drew a very cruel place, the difference between humans and other races ? That's why we draw love-hate drama and tragedy that are born. That's why I think it's an animation that can make me think as a whole. It's not just a hint.

Minase fine, it will remain.

Ono: That's right. I think it's a "remaining work" that can get you through your heart in a good way.

Japan anime "The rise of the shield brave"No.1 animation of 2019 selected by the editorial department

"Nama Ikikari." By Miyuki Bee, serialized in Shoujo manga magazine "Hana to Yume" (published by Hakusensha), has been converted into a voice drama with the appearances of Aino Nanjo, Takuya Sato and Y ...