A collaboration movie of the TV anime "Oda Cinnamon Nobunaga", which will start broadcasting from January 10, and the popular game application "Sengoku BASARA Battle Party" has been released.

This collaboration was realized because there was a common feature that Sengoku warlords appeared in both works. Takeda Lucky Shingen (CV: Tetsuaki Inuda), a lewd dog appearing in "Oda Cinnamon Nobunaga", encounters a similar voiced hero, Shingen Takeda (Tetsuaki Genda) in the world of "Sengoku BASARA Battle Party". , Drawn by a voice down shot. 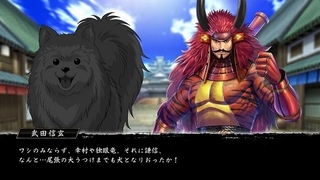 “Oda Cinnamon Nobunaga” is an animated version of a comedy manga serialized by Una Megurokawa in “Monthly Comic Zenon” (North Stars Pictures). It depicts the days of Sengoku warlords, such as Oda Nobunaga and Takeda Shingen, who were reborn as dogs today. On the other hand, "Sengoku BASARA Battle Party" is a warrior training team battle game where many popular warlords of successive works appear based on the world view of the popular action game "Sengoku BASARA" which has also been animated.

In addition, a collaboration illustration has been released. With the same composition as the key visual of `` Oda Cinnamon Nobunaga '', Oda Nobunaga and Shingen, dressed in fancy armor, and warlords of `` Sengoku BASARA Battle Party '' gather in a soft dog run and conduct a military controversy Have been.

Broadcasting and distribution were postponed due to the spread of the new coronavirus, although the second phase of "No Guns Life" was scheduled to be broadcast from April 9th. The new broadcast sched ...

From the spring of 2020, the TV animation "Fruit Basket" broadcast on TV Tokyo and other locations has been unveiled for the 2nd season. The catch phrase "I want to be near you until that moment" is i ...